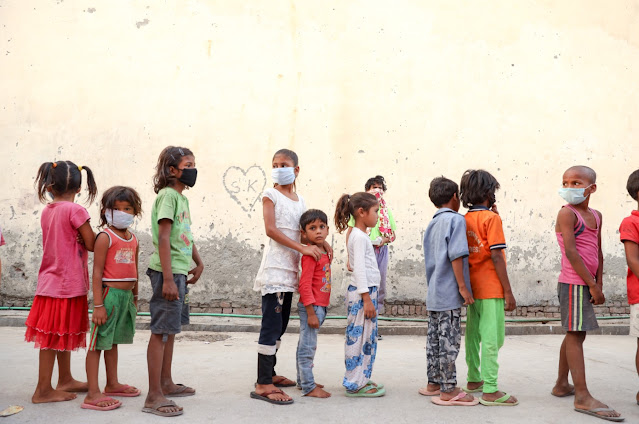 Disasters accelerate inequality.  The adverse conditions facing the vulnerable are exacerbated by disasters, making it harder to overcome those conditions. This is the case for the COVID-19 pandemic. The pandemic had a significant impact worldwide, but its damage is more lethal to the poor.
According to the 2020 UNDP report, the world is experiencing a decline in education, health, and living standards for the first time since 1990. All these declines began with the global epidemic of COVID-19 and are widely observed in all world regions. The economic contraction caused by the quarantine measures severely hit the lives of vulnerable groups such as residents of underdeveloped countries, low-income groups, women, and the disabled.
UN Secretary-General Antonius Guterchs criticized the reality of global inequality exacerbated by COVID-19:

"COVID-19 has been likened to an x-ray, revealing fractures in the fragile skeleton of the societies we have built.

It is exposing fallacies and falsehoods everywhere.

The lie that free markets can deliver healthcare for all; The fiction that unpaid care work is not work; The delusion that we live in a post-racist world; The myth that we are all in the same boat.

While we are all floating on the same sea, it’s clear that some are in superyachts, while others are clinging to the drifting debris."

ㅡ
The face of global inequality revealed by Covid 19
ㅡ

As the pandemic is prolonged, inequality in global income and assets is intensifying. The government's fiscal rescue packages support the wealthy industries, while the livelihood of the vulnerable, who have lost their job due to the blockade, is worsening.

In February 2021, Oxfam, an international aid organization, pointed out in a report called The Inequality Virus that “the world is witnessing the largest increase in inequality in history due to COVID-19”.

○ COVID-19 is an inequality virus: The rich and middle class were able to choose various responses to overcome the epidemic, but many of the poor and the vulnerable had to face a harsh reality with no options. According to The Inequality Virus Report, the top 1,000 billionaires, dubbed ‘Mega-Rich,’ took only nine months to recover their wealth to their pre-pandemic highs. In contrast, the world's poorest people will take more than ten years to recover.

○ Growing Poverty from COVID-19: Due to COVID-19, about 90 million people in low-income countries around the world are at risk of falling into poverty (International Monetary Fund report). If the inequality caused by the pandemic continues to the current level, it is predicted that the world's poor population will increase by about 500 million by 2030 (World Bank WB report).

○ Polarization Accelerated by Digitization and Automation: The COVID-19 contributes to the growing inequality, as the digital transformation of production and operations is accelerating. Increased automation and telecommuting further threaten the labor market of low-skilled, underpaid workers. The problem is, as the ‘new normal’ of the COVID-19 era, such as working from home, is settled, jobs for low-skilled workers are expected to decrease significantly even after the pandemic.

“This is not just a protest against an increase in subway fares,
it is an expression of years of repression,
primarily targeting the poorest people.” 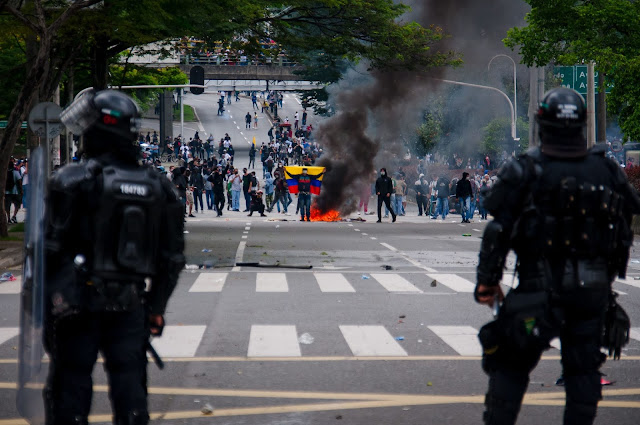 △ Bogota, Colombia, May 2021: The protests that began in opposition to the Colombian government's tax reform proposal have continued despite President Iván Duque's decision to withdraw the reform bill.

From the spark of anger and discontent formed over poverty and inequality on May 10, 2021, protests continue to spread in Columbia. The start of the protest was the government's tax reform plan. The government proposed a tax reform plan to increase the tax burden from those with a monthly salary of about $650 per month, only three times the minimum wage, which created a backlash from the middle and low-income class.

Protesters were angered that the government was only targeting the middle and low-income citizens rather than the wealthy. The protest was also the repressed anger over poverty and inequality that COVID-19 has deepened.

In 2019, massive protests took place in Ecuador, Chile, Lebanon, and Spain as well. The causes, methods, and goals are all different, but the common thing that drives people into the streets is inequality; many protesters have long been isolated from the state's wealth.

Protests in Ecuador began when the government announced it would abolish fuel subsidies, and in Chile, higher bus and subway fares sparked protests. Chile is one of the wealthiest countries in Latin America, but it is also the most unequal. Chile has the lowest income equality among the 36 member states of the Organization for Economic Co-operation and Development (OECD).

On the day when protesters and security forces clashed in Chile, Chilean President Sebastián Piñera was spotted eating in a high-end Italian restaurant, which angered the civilian.

A student at the protest told the media that "This is not just a protest against an increase in subway fares, it is an expression of years of repression, primarily targeting the poorest people."

ㅡ
Only the wealth of the rich continues to grow.
ㅡ

Oxfam International, which aids over 100 countries worldwide, publishes an inequality report every year at the Davos World Economic Forum, which brings together the world's wealthiest and most influential people.

In a January 2020 report, Oxfam diagnosed global inequality as 'out of control' due to the biased economic system that excludes women while billionaires accumulate more wealth. Click the link below to download the Oxfam Inequality Report. 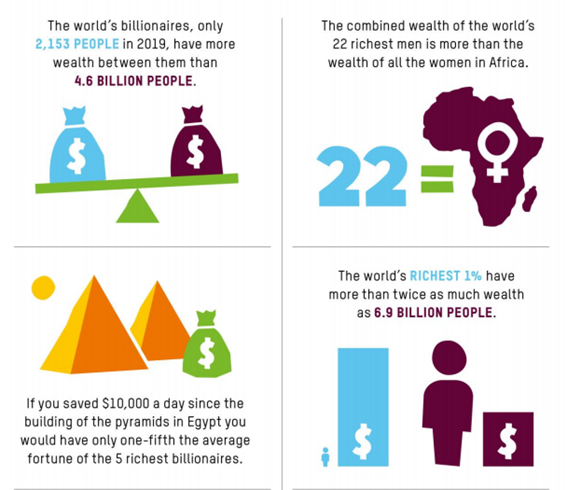 The Oxfam report released in 2020 accused the government of exacerbating inequality by not securing sufficient resources for public services such as healthcare and education, imposing low taxes on businesses and the wealthy, and failing to prevent tax evasion adequately.

○ Women's income is 1/2 of men's income: Up to 30% of the global income inequality index comes from inequality between women and men. Women are earning less than 50% of the median income than men (ranking all households in a country in order of income and then making exactly the middle household as median income).

ㅡ
Why does inequality arise?
ㅡ

Poverty can result from an individual's lack of competence, but it is also the result of social, political, and structural inequality, such as inadequate welfare systems, corruption, and unequal trade structures. Therefore, a holistic approach from a political and social context and a global perspective must be made to solve global inequality.

○ Unstable Politics: War destroys all infrastructure in the country, causes a shortage of labor, and slows investment and business activities if it persists. In addition, when the government cannot fulfill its role due to political conflict, the country faces financial difficulties from reduced domestic and foreign investment and various economic activities.

In countries with high levels of corruption and crime, finances are not properly spent on public infrastructure, education, medical care, pensions, and social security, resulting in corruption. Corruption leads

○ Corruption and Lack of Welfare: a deterioration in the quality of life of the people, loss of the driving force for economic development, and eventually leads to poverty.

○ Low level of education: When countries with low levels of education are immersed in primary industries, advanced countries equipped with labor and skills through high-level education stand out in capital-intensive fields, and the economic gap between these two groups is widened. Without universal and systematic education, technological development and creative economic activities cannot be induced.

ㅡ
The key to resolving inequality is fairness and inclusion
ㅡ

The wealth we enjoy comes from someone who worked hard somewhere. Therefore, everyone who participates in the economic system must be inclusive.

To become a better world, human-centered logic, rather than the logic of capital, should be the basis of the economy. If the profits of business and society are more evenly distributed to all citizens and a sustainable working environment is created, will inequality not be resolved little by little?

○ Fair and inclusive policy: Global poverty has decreased due to the international community's efforts, but the gap between rich and poor has widened. Rather than focusing solely on economic growth, fair and inclusive policies such as education and health care for everyone needs to develop.

○ Fair tax system: Active taxation of the wealthiest is the essential solution to addressing economic inequality. Increasing the tax rate mainly to the rich, such as progressive income tax and inheritance tax, is critical in addressing inequality.

○ Basic Income guarantee: As the economic gap widens, labor productivity and consumption demand of the low-income Disasters accelerate inequality.  The adverse conditions facing the vulnerable are exacerbated by disasters, making it harder to overcome those conditions. This is the case for the COVID-19 pandemic. The pandemic had a significant impact worldwide, but its damage is more lethal to the poor.

7월 29, 2019
Former president of Kiribati tells SF to step up fight as climate change threatens to swallow his island country San Francisco Chronicle 2019.07.17. It was shortly after taking office in 2003 that he realized the peril his country was in, Tong said in an interview with The Chronicle at the Fairmont hotel in San Francisco. “The responsibility of my country fell squarely on my shoulders,” Tong said. “When the science started coming in, it was a matter of urgency.” He’s now sending a statement to CEOs in the Bay Area, reminding them that companies can either be “complicit or helpful” in stopping the further warming of the planet. Since leaving office in 2016, he has spent his time speaking to leaders around the world on the global efforts needed to save countries like his own. “This is a battle we’re in —a huge, unprecedented battle,” Tong said. “I wonder if these companies can use their resources to change our world for the better.” When he visits cities like San Francisco
댓글 10개
자세한 내용 보기

3월 14, 2018
I have spent the last thirty years of my life operating on patients in war-torn countries. After every bomb, after every shell, there are people still struggling to survive. Today, ninety percent of all war victims are civilians, people equal to us, with the same needs, the same hopes and the same desires for their beloved ones. 1994, I founded EMERGENCY with the aim of guaranteeing high-standard, free-of-charge care to the victims of war and poverty. This is because everyone has the right to medical care. EMERGENCY now operates more than 60 medical facilities in 17 of the most dangerous countries in the world, and has saved more that 9 million lives. Post-WWII us seeing the worst case of global mass displacement. In 2016, over 60 million people were forced to leave their homes. The broken lives of refugees urge us to take action. If we wish to work for the survival of humankind, the abolition of war is necessary and inevi
댓글 쓰기
자세한 내용 보기

11월 23, 2018
Bringing Great Improvement to Africa’s Food Security by Leading Africa’s Agricultural Innovation Dr. Adesina had a vision that in order for Africa to overcome chronic poverty in the 21 st  century and stand by itself, African countries must transform their agricultural sectors. With this in mind, for 30 years he has spearheaded agricultural innovation and improved food security for millions of people throughout the African continent.  Dr. Adesina proclaims: “Agriculture is a sector that will help diversify economies, create jobs, and eradicate food insecurity in African countries, as well as achieving food security for the world.” Therefore, he has been at the forefront of establishing major agricultural policies to eradicate poverty in Africa. Dr. Adesina was born into a family of smallholder farmers. Seeing the reality of rural poverty in his childhood, he learned the crucial link between agriculture and livelihoods, and attained a vision of unlocking the potential of Afric
댓글 쓰기
자세한 내용 보기